Though JET fans are still irritated and smarting from the season ending loss to Wrecks and his Bisons, there are two very good reasons JETS NATION can look to a promising future.

The first reason is the new GM, Mike Maccagnan, who assumed the reins of a team in disarray and moved them forward with a steady hand. For the first time in a long time it was obvious the man running the show knew what the heck he was doing. Woody Johnson has taken a lot of abuse over the years for some of the hires he made and rightfully so. But in this case he deserves the lion’s share of the credit for assembling the right advisors in Ron Wolf and Charlie Casserly and then making this critical hire. In this case Woody brought in the right man for the job. Mike Maccagnan did a splendid job turning the franchise around and he did it quickly. He stepped up to the plate and started smacking line drives all over the field.

First he acquires the extremely talented Brandon Marshall via trade for basically nothing (a low round draft pick). People were concerned that maybe Marshall could be a bit of a head case. How’d that turn out? Marshall became the quintessential team player and goes on to write single season JET and NFL receiving records. Then he brought in Ryan Fitzpatrick whom he knew from his time is Houston. All he does is foster an intelligent, quiet calm and confidence to the offense as he sets the JET single season TD record surpassing Vinny Testaverde’s mark of 29 in 1998 with his 31. A pretty good start to the GM’s first off season. But he was just getting warmed up. 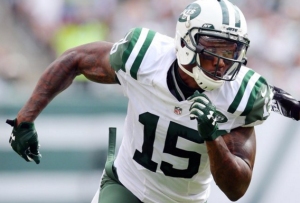 Then he orchestrates a return to Revis Island with Darrelle “Batman” Revis and his sidekick Antonio “Robun” Cromartie. With a wave of his hand he steals Buster Skrine from the Browns and Marcus Gilchrist from the Chargers revamping what had been a horrible defensive backfield and making it one of the team’s strengths. Wow.

Oh wait. There’s more. He drafts arguably the best player in last year’s draft, Leonard Williams when he falls into the Jet’s lap at number six. The kid goes on to have a solid rookie season and is expected to develop into a star in the years to come. He takes linebacker Lorenzo Mauldin who showed some flashes during the year and lastly picks up speedy wide out Devon Smith. Though he had a rocky start to his career, Smith should be a great addition to the offense after a year in the system. He has the speed the offense desperately needs. Mike Maccagnan had an awesome first season with the New York JETS and apparently the Pro Football Writers Association agrees as they voted him the NFL Executive of the Year. Jets owner Woody Johnson has taken a lot of crap the last few years from the likes of Mike Francesca and others in the media. He deserves to be lauded and applauded for making this choice to run the franchise. Thanks also goes to Ron Wolf and Charlie Casserly as well for their invaluable input and guidance. This time the JETS got it right. Very right.

But there is also an important part two to this successful Jet equation in the person of first year head coach Todd Bowles, a no-nonsense no drama tough guy who speaks very softly and carries a large stick. Bowles is a former player and Super Bowl champion with the Washington Redskins, a Parcells disciple and confidante. He was an acknowledged standout as the Defensive Coordinator in Arizona last season.

Bowles also brought a tough minded calm to the team in his first season. He made it clear that the players would be accountable. I was a fan of Wrecks Ryan but he failed in a couple of BIG ways that spelled the end of his reign here. First off was accountability. It’s my opinion his close relationship with the players was maybe too close. He talked a mean game and continually took the blame for his players failures. Bowles approach was more “us” and “we” rather than I. Wrecks other big fault was putting the entire offensive scheme into his assistant coach’s hands. He needed to be more involved with strategy, clock management and just general awareness of what the offense was doing. In a league that has increasingly become throw throw throw run, his insistence on run run run throw was part of his undoing.   In fairness Coach Ryan did not have the team that was handed to Todd Bowles. The secondary he was forced to play with by John Idzik was really atrocious. The offensive skill players were nowhere to be found, and Geno Smith just couldn’t carry the team on his back. Idzik’s austerity budget did nothing for him or Coach Ryan but it certainly put Mike Maccagnan in an enviable position. One that he took full advantage of.

So where are the Jets headed this off season? I would make an educated guess that they want to bring back Ryan Fitzpatrick to hold the seat while they either look for a long term franchise answer at QB or continue to groom Bryce Petty. Geno Smith? I can honestly say I have no idea what they are going to do about Smith. Coach Bowles said he likes the player after the season ended and would have no problem with Smith as the backup. I’m sure Smith has other ideas. Is Smith a better option than Petty? Another question I have no answer for. I saw Smith start for two years and though he had little to work with as far as offensive talent, he really didn’t show me much in the smarts department. Another problem on the offensive side of the ball is the tight end position or lack thereof. This was the year Jace Amaro was going to bloom into the major force they thought he would be when he was drafted. Bitten by the injury bug we’ll have to wait till next season to see if he can perform as expected. “Baby Gronk” Zach Sudfeld was supposed to be the “other” tight end. He too saw injuries short circuit his season. One wonders how much more dynamic the Jet offense would have been with these two guys lining up for Fitzpatrick. Amaro as the pass catcher and Sudfeld the big time blocker. It’s obvious Chan Gailey was too thrilled with his tight ends seeing how Jeff Cumberland did little this year. The offensive line is solid but it’s probably time to go looking for quality depth. They are pretty long in the tooth at left tackle and center. Mangold is an awesome force but he’s going to break down sooner or later. His injuries this year were a forewarning of what’s ahead. The running back situation seems fairly stable with Ivory, Powell, Stacy and Ridley but none of these guys are home run hitters. Should a burner with moves become available in the second or third round maybe the Jets should grab him.

Moving to the defensive side of the ball there are some serious questions that GM Maccagnan will have to address. Franchise tag Mo Wilkerson? Seems logical. What do you do about Damon Harrison who has become one of the top three nose tackles in the league? If he goes free agent the patriots, The Giants, The Dolphins or the Bills would swallow him up in a flash. Is Demario Davis the answer at linebacker? A force against the run…a liability in pass coverage. What about an edge pass rusher? Bowles defense is sorely lacking a pass rusher with speed who can disrupt things from the outside (just look at what DeMarcus Ware and Von Miller did to The Patriot offense yesterday) His defensive line is formidable but they just don’t get enough pressure and sacks on the QB. The secondary looks pretty good but questions here as well. Do they continue with Cromartie or do they promote Marcus Williams or Dexter MacDougal?

I can say that for the first time in a long time I am comfortable and confident that Mike Mccaganan will make the right decisions and keep the Jets on an upward trajectory. A move here or there and this team could be playing serious January football next season. We can only hope.