If you are on Long Island in New York you know that spring is now in full bloom and summer is just a few weeks away.  The weather by and large has been pleasant and pretty good for growing vegetables.  Not too much rain,  not too much heat…just a comfortable mix of the two and the early vegetables have been productive and tasty! 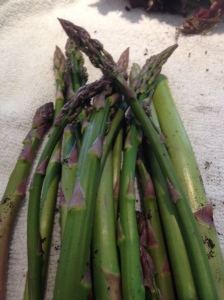 We got our first batched of asparagus and they were delicious.  There were a few “stringy” stalks but by and large it’s been great for the first harvests.  We were told by a friend and awesome gardener Mike to allow some of the stalks to go to seed to strengthen the plants for future years.

We even had some mild success with broccoli rabe this year.  We’ve never had a huge harvest but we did get a couple of dinners out of it this time around. 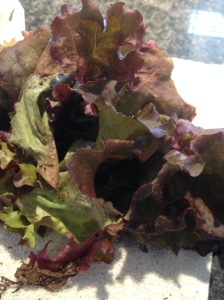 The lettuce is ALWAYS GREAT on Long Island.  So far we’ve had green and red romaine and ruby red.  It’s readily available as plants or seends from many sources and it’s super easy to grow.

Here I am with armfuls of escarole,  a vegetable that my grandmother always made around holiday time.  Delicious and healthy, great for the digestive system (at least according to the old italians) We cook it up into a soup and freeze it fro a warm tasty delight during the cold winter months.

Now that the early sping is passing us by,  there are other vegetables beginning to make appearances.  Our snow peas are about 12-14 inches high and with a little more rain and a little more warmth we should be seeing peas shortly.  The plants usually make massive amounts of edible pods…some years 50 pounds or more! 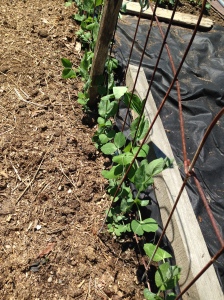 This year we put in red skin potatoes.  Only need a few.  We don’t eat a large amount of potatoes but if we get 40-50 that will last all year.  Potatoes arean interesting situation.  As the plants grow you have to continue to bury them in peat moss and straw.  This prompts the plants to make the potatoes in the losse covering above the ground,  and makes it a whole lot easier to pick them come end of season. 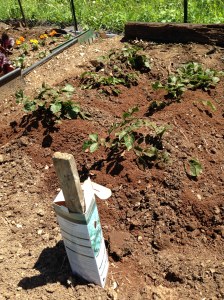 Beets and herbs are always easy.  The Long Island environment is perfect.

Most of the herbs are perennial so that’s a bonus.  We have Russian sage, Greek oregano, rosemary and onion grass in the plot.  Later in the year we’ll add basil, parsley and cilantro.  Of course the garlic we planted last September os now 18 inches high and getting ready to be picked the first week of July.

Ok gardeners…get out there and pull those weeds!  Part 6 in a couple of weeks once the tomatoes are larger and the peppers are in.